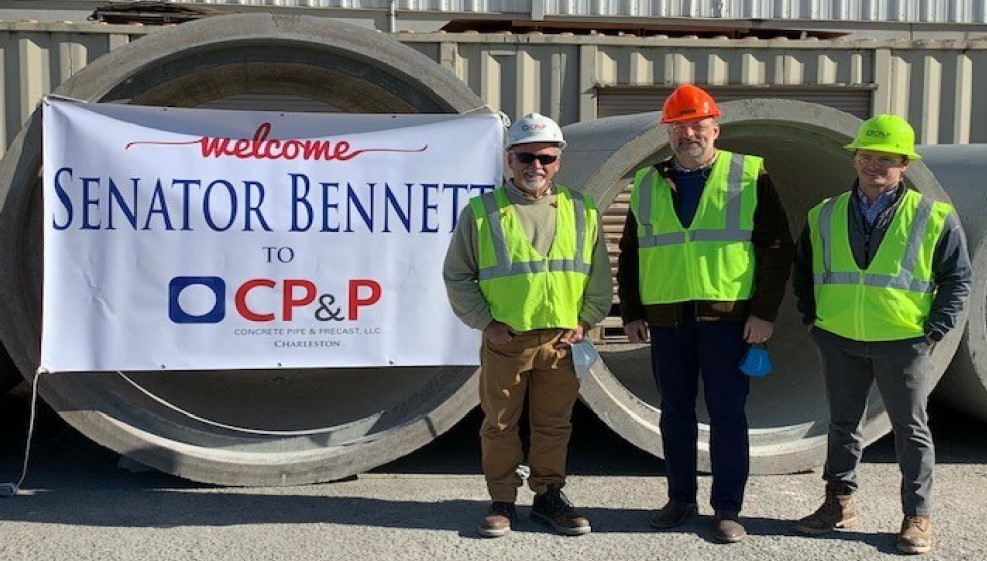 On November 11, 2020, CP&P’s South Carolina team, in partnership with the Carolinas Concrete Pipe and Products Association (CCPPA) invited South Carolina Senator Sean Bennett to tour CP&P’s Charleston and Summerville facilities. Showcasing what the concrete pipe and precast industry means to the state, Senator Bennett was impressed by the many people CP&P employs locally and statewide.

Senator Bennett’s visit began at the Charleston Pipe Plant with greetings from plant employees as well as the CCPPA Director, Marc Finlayson. The senator joined the plant safety orientation meeting, where John Blankenship spoke about the history of both the Charleston Plant and CP&P in general. Mr. Finlayson followed with a description of the CCPPA organization and its role in the Carolinas, before a full plant tour of the Charleston facility ensued.

Because of the senators’ several committee responsibilities, including South Carolina’s Transportation Committee, CP&P felt it important to demonstrate the effectiveness of a plant verified, structural concrete pipe product versus its competition, a plastic soil dependent pipe that must be meticulously backfilled and tested properly in the field. By showing Senator Bennett the value of precast concrete pipe, CP&P hoped to enable him with the resources to serve prudently and effectively when irresponsible pipe preference legislation comes back before the South Carolina General Assembly.

After the Charleston tour, the group traveled the short distance to the CP&P Summerville Precast Plant, where they were given a quick safety orientation followed by a tour of the facility. Senator Bennett commented, “I live here in Summerville and ride by this plant several times a month, and I never stopped in to see what y ’all do.” Senator Bennett was shown the entire facility, including multiple product set up areas, pouring and stripping areas, as well as the many finished products stored on the yard including precast box culvert, Retain-it storm water modules, nuclear containment products, and other various stock items.

The tour wrapped up with an outdoor catered lunch for the tour group and the Summerville office and plant employees. Several times the senator expressed his appreciation and remarked that he had had an enjoyable, well-spent day.